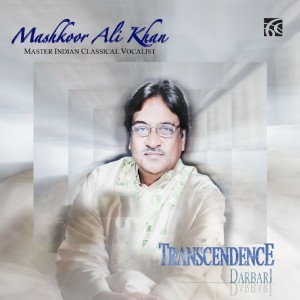 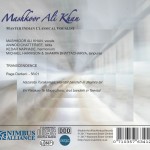 Performed deep into the night, raga Darbari is characterized by solemnity as well as a deep sense of longing and devotion. The gravitas of this raga tests the very limits of any master vocalist. Darbari stands at the very pinnacle of the repertoire. It is derived from the ancient South Indian raga Kanada, which uses the same notes as the natural minor scale, and is therefore often referred to as Darbari Kanada. It creates a sense of spiritual awakening that arises from the unique collection of melodic contours and ornaments that blossom in performance.

The profound emotions of Darbari are flawlessly evoked in this recording by Mashkoor Ali Khan, or Khan Sahib as we respectfully call him. The raga is not necessarily somber, however, and can be joyful as portrayed in the drut bandish (fast composition starting at 47:12) which deals with anticipation and reunion. Khan Sahib and the great vocalists of his lineage, the Kirana gharana, shine in their renditions of deep and emotional ragas which unfold over a slow tempo and are well suited to an extended barhat (development of the raga). This provides a vehicle for them to display their mastery of the raga, meticulously delineating each note in a myriad of ways, and working around the musical polarities of the vadi and samvadi (the principal and main supporting notes). For these reasons Darbari remains one of the much-favored ragas within the Kirana gharana.

Khan Sahib initially learned Darbari from his father Shakoor Khan, but his inspiration and enlightenment came later after listening to the historic recording of Darbari by Abdul Wahid Khan (Shakoor Khan’s guru and Khan Sahib’s great uncle). According to Khan Sahib, Wahid Khan was the first to introduce taans (fast melodic passagework) in Darbari, as earlier musicians generally avoided them, given the seriousness of the raga and difficulties with its taan construction. Wahid Khan’s taans however were completely imbedded within the melodic precepts of the raga and masterfully avoided slipping into the contours of related ragas, such as Adana or other Kanadafamily ragas. When Khan Sahib sings Darbari this rich legacy inspires him, and allows him to transcend the physical plane, as he visualizes himself sitting in a regal darbar (court) with the luminaries of his gharana before him.

Khan Sahib once told me about an important engagement when he was young and less established. Bhimsen Joshi, the most well-known vocalist of the time, was scheduled to perform at the prestigious Dover Lane festival. Joshi fell ill at the last moment and insisted that Khan Sahib sing in his place. When it was announced, almost everyone left; however, when Khan Sahib started singing Darbari the audience gradually started returning to listen until the hall was packed. Over the years, I have had the privilege to accompany Khan Sahib on a few occasions when he sang complete renditions of Darbari. One of these was a private concert with his friend and mentor, the great sitarist Ustad Vilayat Khan, who was seated directly in front of us.

In the voice of a master musician such as Khan Sahib, raga Darbari reveals a state of spiritual devotion leading to transcendence. All of his mastery is at the service of a deeply nuanced performance, creating a spellbinding mood and a well of emotions that captures his listeners, transporting them to a sublime realm of the musical imagination. In the end how many works of art can sustain and develop a deep and solemn mood continuously over the course of an hour while keeping an astute listener fully engaged? It is rare that artists living in the modern world can so perfectly transport us into the world of music and culture of an ancient time. The form and gradual unfolding of Khan Sahib and Anindo Chatterjee’s rendition of Darbari mirrors the deep devotion and emotions of India’s legendary musician and creator of Darbari, Miyan Tansen, echoing through the majestic arches of Akbar’s Mughal court almost 500 years ago.

Mashkoor Ali Khan’s music is the full manifestation of one of the oldest continuous music lineages in the world. The Kirana gharana can be traced directly to the legendary musician Gopal Nayak of the 13th century and it has been passed down through consecutive generations of Khan Sahib’s family. The name of this school of music derives from Kairana, a small town in Uttar Pradesh where Khan Sahib was born. The international esteem of this gharana is testimony to the genius of Khan Sahib’s two great-uncles, Abdul Karim Khan and Abdul Wahid Khan, who were both born in or near Kairana in 1872, and who were largely responsible for innovating and popularizing the gharana. It is in Kairana where Khan Sahib lived and received his early training from his father, Shakoor Khan, the esteemed disciple and devoted sarangi player for Wahid Khan.

It is worth noting that the Kirana gharana has already had a profound influence on Western classical music. La Monte Young and Terry Riley, regarded as the founders of minimalism, perhaps the most influential development in the second half of the 20th century, each devoted 26 years to the study, practice and performance of music from the Kirana gharana as disciples of Pandit Pran Nath. The essential connection between Indian classical music and the music of Young and Riley is a similar aesthetic in relation to repetition and gradual development over a long architectural form. Other key elements of the Kirana lineage play an important role in their works, including improvisational structures such as alap and vistaar (elaboration of the notes), asymmetrical and additive rhythmic structures, overlapping rhythmic cycles, harmonic motion distilled to the essence, drones, and above all (especially for Young), purity of tuning or “just intonation.” These special attributes of the Kirana lineage transformed their lives in a way that gave their work unique qualities in the history of music.

Michael Harrison is a composer and pianist who has bridged the European musical traditions with those of Indian classical music, forging a new approach to composition through tunings and methodologies that employ and extend the ancient concept of “just intonation.” Before becoming a disciple of Mashkoor Ali Khan in 1999, Harrison was a disciple of Pandit Pran Nath, La Monte Young and Terry Riley, with whom he studied since 1979.

A. Vilambit bandish in Jhumra tal

This composition is attributed to Tanras Khan, the founder of the Delhi gharana and court musician in the court of Bahadur Shah Zafar, the last Mughal emperor of India. It was composed in praise of Hazrat Shah Turkman, a very pious Sufi saint from 13th century Delhi.

Translation: I submit myself at the feet of Hazrat Turkman, my saint, my Pir, for he is the true one. Oh Shamsul Arafin (another title of Turkman), please remove all the misery and grief from this world as only you can. You are the one with knowledge of both the worlds, the present as well as the after.

B. Drut bandish in Teental

Translation: My eyes are fixated on the pathway, for that is the path my beloved will come down when he comes home. Come to me my beloved, you as bright as the sun. I have decorated the swings with flowers in anticipation.

Ustad Mashkoor Ali Khan comes from a distinguished musical line that includes some of the foremost figures in Indian classical music. A direct descendant of the family of the great Ustad Abdul Karim Khan and the legendary Sartaj-e-Mousiqui Ustad Abdul Wahid Khan, who were luminaries of the Kirana Gharana, Maskhoor Ali is the son of the great Sarangi-nawaz Padmashree Ustad Shakoor Khan.

Initiated and trained by his father for fifteen years, young Mashkoor Ali had secured a place for himself in the world of music even before his father breathed his last.  Since the 1980’s he has been a Guru at the ITC Sangeet Research Academy, India’s premier institute of Hindustani classical music in Kolkata. He is well respected as the Khalifa of the Kirana gharana because of his lineage and his erudition and keen understanding of the nuances of the gharana’s gayakee or style of singing. He is also credited as having one of the richest collection of bandishes or compositions in the khayal genre of music in India.

Gifted with an ability to summon crystal-clear melodies from his drums, Pandit Anindo Chatterjee is recognized as one of the world’s greatest tabla players today. He belongs to the Farrukhabad gharana. Inspired by his uncle, he first began playing tabla at the age of five, studied briefly with Ustad Afaq Hussain Khan of the Lucknow gharana, then advanced to Pandit Jnan Prakash Ghosh, with whom he studied for three decades. The recipient of the prestigious President’s Award in 1970, Chatterjee became the first tabla player to perform in the House of Commons later and received the Sangeet Natak Akademi award in 2002. In addition to solo performances, he continues to work with most of the preeminent Indian classical musicians of his generation.

Kedar Naphade is one of today’s leading exponents of the art of harmonium solo and accompaniment in Hindustani classical music. He is a senior disciple of the legendary maestro Padmashri Pt. Tulsidas Borkar as well as Smt. Padmavati Shaligram, a veteran of the Atrauli-Jaipur Gharana. Naphade has performed harmonium solo concerts and accompanied vocalists at numerous concerts in India, Europe and in the U.S. including prestigious venues such as the Alladiya Khan Smruti Samaroha, Dadar Matunga Cultural Center in Mumbai, Carnegie Hall and Lincoln Center in New York, Smithsonian Institute in Washington D.C. and beyond. He has been featured on National Public Radio and has shared the stage with luminaries such as Pt. Jasraj, Smt. Veena Sahasrabuddhe, Pt. Ulhas Kashalkar, Smt. Prabha Atre, Ustad Mashkoor Ali Khan, Smt. Laxmi Shankar, etc.